There are days that I feel really small and insignificant.  Days when I wonder if I should bother to get out of bed because what good can I do?  There are days when I can only see myself through the lens of my inadequacies and limitations.  Those aren’t particularly great days.  This way of thinking and feeling is kind of an epidemic; we’re more likely to think negatively rather than positively about ourselves or our situations and circumstances.  Our culture reminds us of our flaws and seeks to sell us something to fix them.  If someone compliments us, we almost don’t know how to react, and maybe feel the need to convince them they’re wrong.  I had this problem for years, until someone told me to shut up and just say, “Thank you.”

Gideon is one of my favorite dudes from the Bible because he encourages me.  He encourages me, not by his greatness or charisma, but by his lack of both those things.  He’s a nobody from a nobody family, from a nobody clan.  At least that’s how he sees himself.  But that’s not what matters.

[If you’re not familiar with the story of Gideon take a peek at the book of Judges in the Old Testament, chapters 6 and 7 in particular.]

After reading these chapters, let me share some thoughts:

The power of the Midianites was oppressive.  They were like locusts that came through and stripped everything bare.  This was the seasonal reality.  The people of Israel had adapted to this reality.  They built hideouts in the hills.  They had found ways to exist in a constant state of fear and defeat.  Gideon’s threshing grain in a winepress—a sunken spot out of clear view—is a great example.

The Israelites began to doubt God and even their identity as God’s people.  They felt abandoned.  Even though they knew what God had done in the past, they failed to see Him in their current situation.  But here’s the reality: they found themselves in this situation because they “did evil in the eyes of the Lord.”  They had conformed to the paganism all around them and were reaping the consequences of this disobedience.  Nonetheless, they weren’t abandoned.  Their cries were heard.

God responded to the outcry of the Israelites by tagging a guy named Gideon to  lead them.  However, the first thing we learn about Gideon is that he’s hiding out.  Remember, he’s threshing grain in a winepress.  When the angel of the Lord calls him to take on the mantle of “mighty warrior”, he identifies himself as from the weakest clan in his tribe and the least in his family.  He’s basically saying he’s a nobody.  He’s the last person to be tagged for leadership.  He has zero authority, even in his own family.  Nothing about Gideon lends itself to victory or success.

God sees what we do not.  And He has a plan.  First, the distraction of the pagan gods must be removed.  They serve to turn the hearts of the people away.  While they placed their faith in pieces of gilded wood, how could they truly trust God for deliverance?  Their hearts could not be divided.  So Gideon is told to destroy the idols of his father.  In so doing, we see Gideon’s ongoing uncertainty.  Instead of doing the deed in the light of day, he waits until night.  Nonetheless, the job gets done.

The next task is to confront the Midianites and their allies.  Gideon, even after encountering the angel of the Lord, holds onto his doubts.  He tests God by laying out fleeces.  By the way, this is not an act of faith—it’s one of fear.  He’s hoping for an excuse to back out.

The angel of the Lord identifies Gideon as “mighty warrior.”  This is in stark contrast to how Gideon—and probably everyone who knows him—views himself.  Gideon is being sent; he doesn’t go under his own authority.  His power is not his own, but that of the One who sends him and will be with him.  It takes some convincing for Gideon to see himself through God’s eyes.

The angel of the Lord asks, “Am I not sending you?”  He’s basically saying to Gideon, “Go make a difference.  You’re complaining about these Midianites.  Go!  I’m giving you the authority to defeat them.  Go!”

What we see in this story is that God’s power is shown best in our weakness.  Gideon’s army, even though it was small and hopelessly outnumbered, was still too big.  The glory would have gone to Gideon, rather than to God, so God pares it down: the fearful get to leave; then God pares it down further, keeping only those who drink from their hands rather than directly from the stream.  That leaves 300, which is ridiculous, at least on paper.  But NOW, the circumstances were ripe and right for God to work.

Gideon and his tiny army were victorious, but the victory and glory were the Lord’s not Gideon’s.  Common sense said that they needed more soldiers, more armor, more resources to defeat Midian.  What was really needed was more FAITH and more OBEDIENCE.

Do you see yourself in Gideon?  Well, let me explain how I think we’re a lot like Gideon:

First, we don’t see ourselves as God sees us.  Do you see yourself as beloved by God, as God’s treasured possession, as His child, as made in His image?  Do you see yourself as wonderfully and fearfully made? Instead of seeing ourselves through God’s eyes, we allow our identity to be found in our weakness, faults, and limitations, rather than in Christ.  We struggle to see the potential and possibilities of being in Christ and Christ living in us.

Second, we are SENT, but we’re reluctant to GO.  God gives us authority, but we hesitate to receive it, because to receive it and acknowledge it means being responsible for it.  We set up tests and reasons NOT to go when or where we are sent.  Truthfully, we are experts of rationalization.  We can always find an excuse to shirk the call to GO.

In fact, the Church in the western world has largely forgotten how to GO, or that they need to.  It’s much more comfortable in the status quo, in being cloistered away from the world.  Instead of GOING, the church has too often resorted to lobbing “holy hand grenades” from within its walls.  Instead of ADVANCING into the future Christ has for His church, it RETREATS into the past to seek lost laurels and glory days.

Third, we think we need MORE to succeed in the mission God has given us.  Individually, we think we need more education or training before we can possibly be qualified.  We should prepare, certainly, but endless preparation should never be an excuse to avoid engaging the mission.

These are all excuses.  We think we need more…something…anything; we simply don’t feel like we’re enough.  But that’s the beautiful thing: we aren’t and will never be.  But it’s not about us!

As a church, we get sucked into the “Myth of More,” thinking we need more people to be successful or impact the world for Christ.  We can get sucked into a “small church” mentality where we believe small size equals small impact.  Time and again God uses the smallest, weakest, and least expected to do great things.

The Myth of More makes us believe we need more assets or resources to succeed: bigger/better buildings, bigger budgets (more money), bigger/better worship services, or a better/more charismatic pastor or leadership.  The myth is that if we only had more or better “stuff,” whatever that may be, we would succeed in our mission to impact our neighborhoods, cities, and world for Christ.

But here’s the truth: obedience in faith is the crux of success.  If we don’t GO, we will never KNOW success.  Only when we step out in faith can there be victory.  The “Midianites” in our world—whomever/whatever they happen to be—are never defeated without obedience.  Nothing is accomplished “in the winepress.”  Battles aren’t won and God is not glorified in us if the SENT don’t GO.

We will be fearful as long as we focus on ourselves or the situations we face.  If we keep our eyes on Christ, the author and finisher of our faith, and keep our trust in Him, He will be bring about the victory according to His will.

There’s a fourth way I see us, particularly at Community of Grace, in Gideon: even though he’s reluctant, he GOES.  The victory is won, the oppressed are freed, and God is glorified.  We’re just learning to really GO, and just beginning to see what can happen when the SENT GO in faith and obedience.

We’re just taking our first steps, but I’m excited for the journey God has us on.  He says to us, His church, “Am I not sending you?”  The answer is YES, so we will GO.

PA with Richard from Bridge House and Rev. Faith Tolson 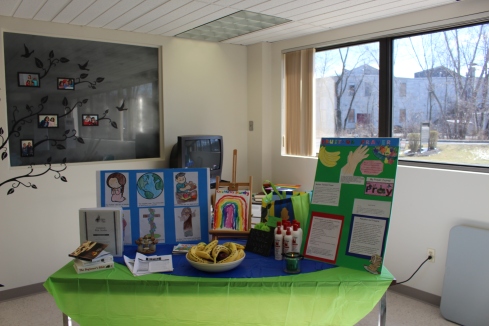 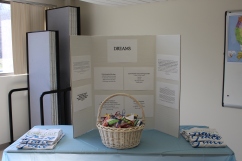 We’re from all over! (Each flag points to region someone in the church is from) 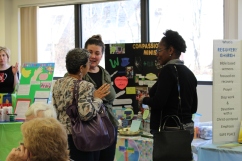